How to Get Rid of Moles

This time of year, it’s not uncommon to see mounds of dirt showing up in your lawn.  These mounds come from moles tunneling underground.

Left untreated the moles will only multiply and cause greater damage in the spring. I have six such mounds in my own front lawn and have decided it’s time to go to work. 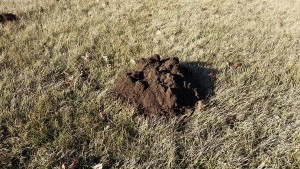 There are a couple of ways to eradicate moles, with trapping or  baiting.  With trapping, you really need a “run” that is at the surface of the ground.  A run is made from the mole pushing the first few inches of soil up.  This causes an uneven lawn and damages the grass roots which can cause the grass to die.  In the winter, moles don’t make many runs since the ground is too frozen to push up and also because their food source, insects and earthworms, have moved deeper down in the soil profile. The mounding we see in the winter comes from the mole tunneling at a  deeper depth.  (To make a deep tunnel, the mole has to bring the dirt to the surface.)

How Bait to Moles 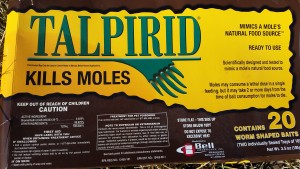 With the mole working deep underground it cannot easily be reached using an above ground trap so baiting is a good alternative in the winter.  I like the product Taliprid, which is bait that resembles an earthworm and is sold at the Grass Pad.

The first step in using this method is to rake away the mound of dirt, leaving a flat spot on the surface of the lawn. Next, take a pencil or stick and probe into the soil until you find a void.  This is where the moles tunnel reaches the surface of the mound.  Once you break into the void gently clean out the hole and mark it with a flag or stick.  If you have several mounds repeat the process. The next day revisit the holes to see which ones were repaired or plugged by the mole.  (Moles don’t like breaches in their tunnels.)

How to know what tunnels do moles use most often?

I had six mounds and only one was repaired.  The tunnel that was repaired is the one the mole uses frequently and the one you want to bait. Don’t waste your bait on the holes that weren’t repaired.  On the hole that was repaired, take a stick and reopen it and slip the fake worm down inside.  Use plastic gloves to help keep your human scent off the bait. You may have to use your stick to push the worm down the hole.  Once inside, lightly cover it with dirt. 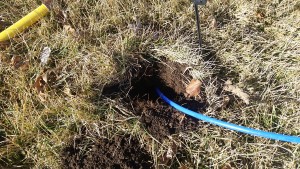 The bait method is effective, but my only complaint is I’m never quite sure the mole ate the bait, other than maybe less mounding or tunneling activity on the lawn. Where on the other hand, when using traps you know that you have succeeded when you find a dead mole.  So, just for the fun of it, I tied a fishing line on the end of the worm before I slid it down the hole so I could retrieve it the next day.  When I did pull it out the following day more than half the worm was eaten which gave me some satisfaction knowing my work was not in vain. Left unchecked moles can quickly multiply and ruin a beautiful lawn.

Controlling moles is not a quick and easy process, but with persistence you will have success.  Happy hunting! Or is it happy fishing? To ensure your lawn always looks beautiful, call the Lawn Care Experts at Turf Solutions for all your aeration and fertilizer needs! 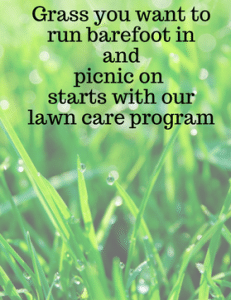